VCS is proud to announce the spring 2020 SDL Academic All-League student-athletes. These student-athletes have maintained a 3.5 or higher GPA. We congratulate you and thank you for your hardwork and dedication, demonstrating academic and athletic success. GO FALCONS!

The SDL selected Lilya Gardner and Houston Bradeson as SDL Scholar Athlete Scholarship recipients, awarding each of them with a $100 scholarship. The criteria, in addition to academic success, was based on athletic performance, sportsmanship, leadership, and excellence of character. VCS Falcons congratulate you – WE ARE SO PROUD!

Lilya spent her high school career dedicated to volleyball and softball.Her coaches spoke very highly of her and ability to be the spirit leader for her team. Coach Munar and Coach Borges continued to share how she could be counted on to ” shift the energy on the court to one of encouragement.”

“[Lilya] played with heart and stepped up as a key defender for our team.  Her positive spirit radiated from the court.” Coach Munar

Coach Barrows, Head Coach for the Women’s Softball program echoed the sentiments, “she’s there for her teammates, always ready to help out with encouraging words or to help them through drills.”

“She’s a great kid, always willing to put in the work to get the job done, doesn’t need shortcuts.”Coach Barrows

Lilya plans to attend James Madison University in Harrisonburg, Virginia in the fall.  She will pursue a degree in Justice Studies.  We wish her the best as she plans to tryout for their softball, volleyball, and equestrian teams.

Houston could be found on the basketball court and the baseball field.  Coach Kuch commented that “Houston’s understanding of the game [of basketball] and awareness of his teammates enabled the team to play to its optimal level.”  Baseball Coach Motta described him as “a pleasure to coach and a true friend on and off the field.”  Houston’s teacher’s describe him as a young man with a great deal of integity and compassion for others.

“Houston Bradeson, a young man of few words, yet his actions are plentiful.”Coach Motta

Houston plans to attend Gonzaga University in Spokane, Washington, in the fall. He will be pursuing a degree in Sports Management and plans to stay involved in athletics.

“His dedication and selflessness improved his individual play and the performance of the team.”Coach Kuch 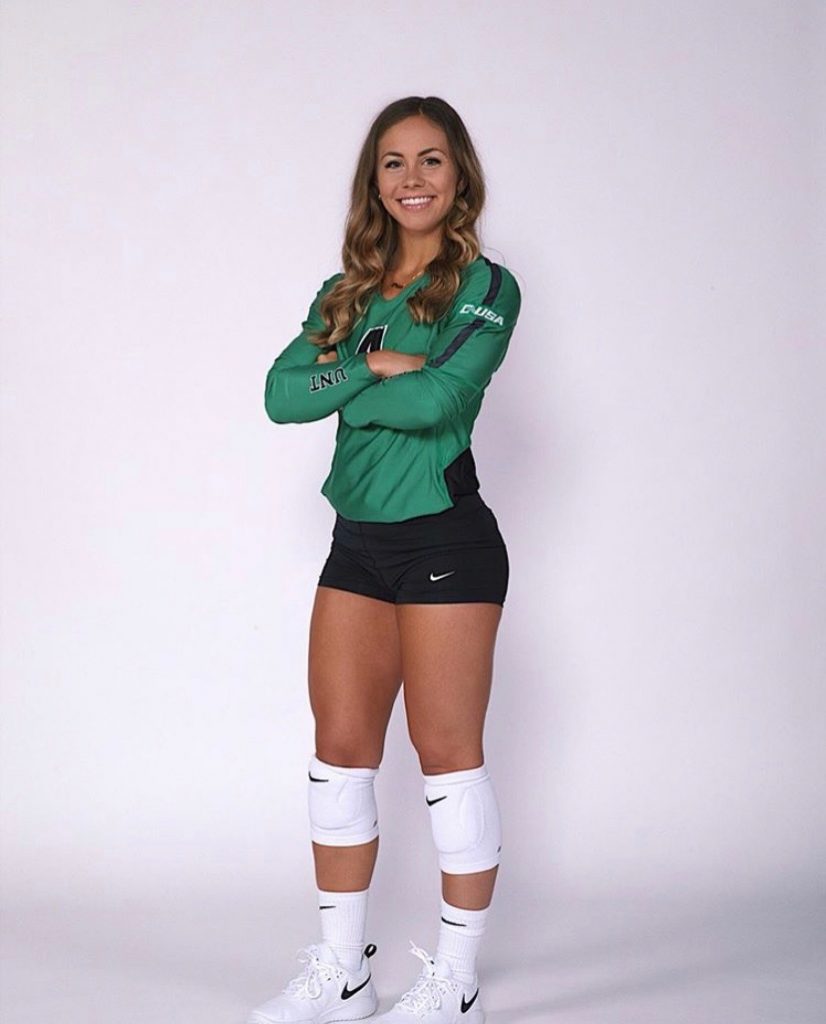 College sports are no walk in the park – in fact, they are more like a full-time job. A mix of classes, weights, practices, film, and meetings, are just the average schedule for these athletes. Mix in travel time and in-season obligations, and the amount of commitment gets higher than one thought possible. VCHS class of 2016 alumna, Olivia Petnicki, has now graduated from the tireless routine of being a NCAA Division 1 student-athlete. Through her experience, she learned the valuable lesson of taking the leap of faith, despite hesitation, trusting there is more to come.

Once Petnicki left her successful volleyball career at Vacaville Christian in 2016, she went off to play as a defensive-specialist for the University of the Pacific in Stockton, California. While at UOP, Petnicki played indoor and beach volleyball – a year-round commitment. A highlight during her time as a Tiger includes a five set victory against Oregon State in front of a packed Spanos Center. The Spanos Center can seat over 5,000 people – imagine how the environment must have been during that thriller. After two years with the Tigers, Petnicki chose to transfer to the University of North Texas (UNT) in Denton, Texas. Unhappy with the culture of her program at the time, she knew she needed a change. “Looking back on my decision to transfer I remember being so worried of the unknown and taking a leap of faith, but I could not be more happy with my decision,” expressed Petnicki.

UNT proved to be a worthwhile jump. In her first season with the Mean Green, Petnicki appeared in 89 sets, averaging 0.53 assists per set. In the National Invitational Volleyball Championship post-season tournament, Petnicki and her team advanced all the way to the semi-finals. Their run was cut short by Iowa State, but UNT took out Tulsa and Wichita State on the way – “two really good teams”. After her final season, Petnicki walked away with 55 digs and six aces. Unfortunately, she also encountered a serious injury in her last season as a D1 volleyball player.

Petnicki developed thoracic outlet syndrome at the start of her senior year. “My whole arm would be in extreme pain and there were days I could not play through the pain. I struggled for about 6 months before I got an appointment with a vascular surgeon.” Almost immediately after the appointment she braved a surgery where her first rib was removed. Additionally, the doctors released her pec minor muscle and three scalene muscles. “Thoracic outlet is a pretty rare syndrome where the veins, arteries, and/or nerves are getting cut off in your shoulder/neck area and cause symptoms in your arm. For me my symptoms were swelling of the whole arm, constant aching from my neck to my hand, and nerve issues.” After two months of unanswered questions, Petnicki found a solution and much needed relief in order to help her pain. She is now happily on the road to recovery. 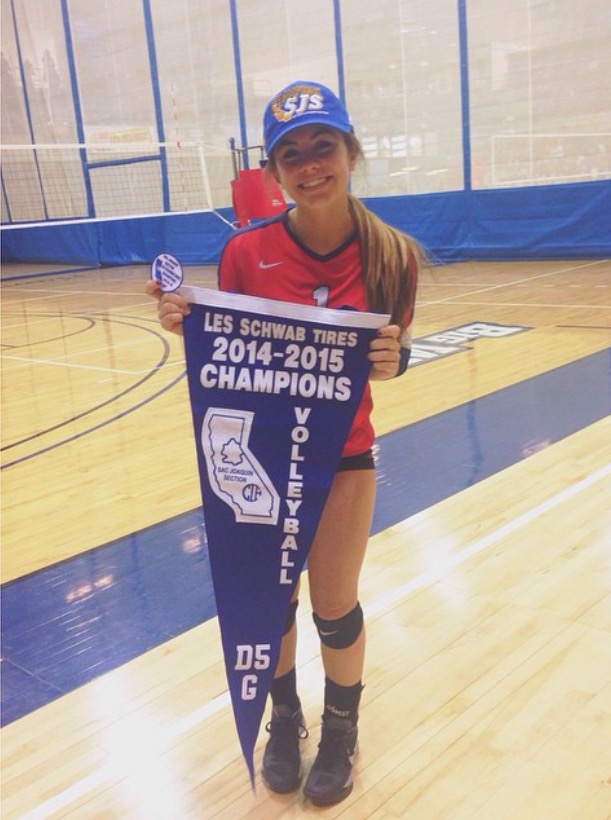 Back in high school, Petnicki was an essential piece to the three-peat volleyball section champion team of 2013 to 2015. She was Player of the Game in the 2015 section finals and was also nominated for the Sacramento Optimist All-Star game the same year. Though she has been privileged with once in a lifetime experiences as a college athlete, she still faced temporary doubt when considering the commitment of D1 sports.

“Sometimes I feel like I missed out on a normal college experience because I was so busy with volleyball. I wish I could have had more free time or even rushed a sorority at a big school. However,  looking back I would not want to do it any other way!”

Petnicki shares that she loved being a college athlete and all the perks that came with being a division one player. Not only were the free clothes awesome, but the valuable lessons made the sacrifice worth it.

Now graduated from UNT, Petnicki is pursuing her MBA in Marketing Analytics. If she could share any piece of advice to prospective athletes who want to play at the collegiate level, she tells first and foremost to believe in yourself!

“You have to be your biggest supporter and advocate, especially mentally! College sports are NOT easy at all, especially at the division 1 level. There are so many days athletes don’t enjoy what they do at all, and even think if any of it is worth it. I have been there, trust me. But you have to push through the hard times and always believe you are the best on that court or field.”

She encourages athletes to give their 110%, stay present, and be a respectable teammate on and off the court, as those relationships you have off the court end up being far more important than the games you play.

From Olivia Petnicki to her Vacaville Christian community: I am very grateful for the extremely supportive Vacaville Christian family! I attended VCS since I was 4 years old, and grew up in the school. I feel so blessed to have gotten to grow up in such a Christian environment, especially as I have gone to a public college where many did not get the upbringing I did. I fell in love with volleyball at VCS, made some of my closest friends, created some of the best memories, and ultimately learned how to be a hard worker. The most important thing I learned at VCS was how to love God and trust Him in everything I do. I cannot imagine how my life could be right now if I did not have all of the support I did from the Vacaville Christian community! Thank you!!! 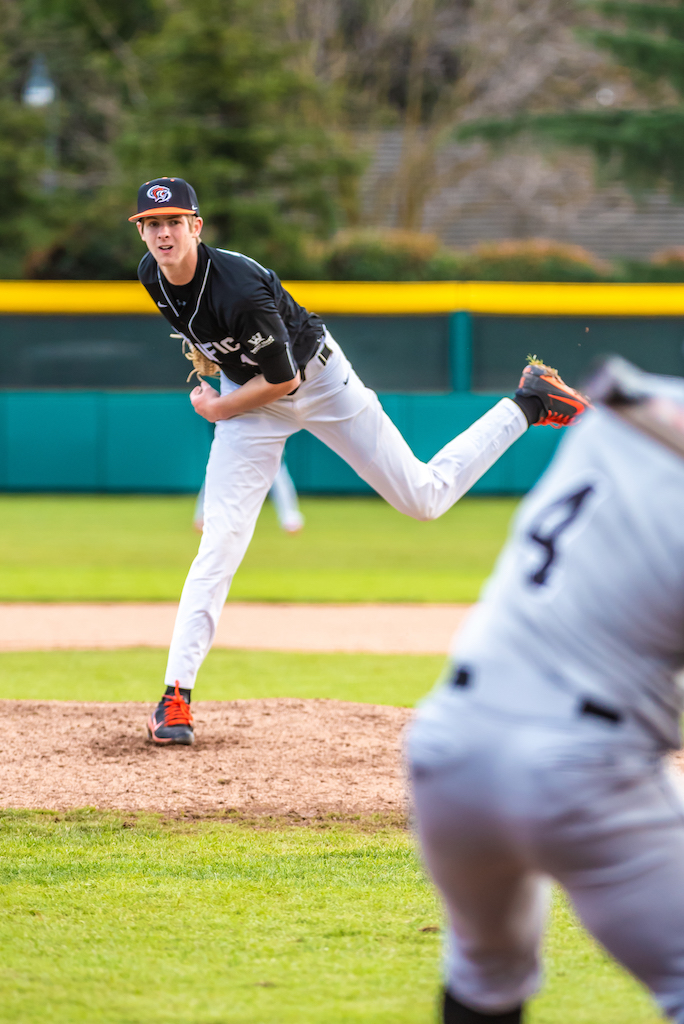 The COVID-19 outbreak has without a doubt tremendously impacted our current world. Schools across the country have transitioned to remote learning, businesses have closed indefinitely, and sports seasons have been cancelled. Though the current circumstances can seem dreary, Lucas Sweany clings to his hope in God’s control and sovereign plan in the midst of this pandemic. Sweany was only a third of the way into his junior season of collegiate baseball when his season faced an abrupt end. Though an obvious disappointment, Sweany expressed his understanding of the cancellation, stating he thought it was ultimately the right decision since it will protect people from being exposed to the virus.

Sweany graduated from Vacaville Christian High School in 2017 and went on to pursue his collegiate career at the University of the Pacific (UOP) in Stockton, California. Sweany initially chose Pacific for its professionalism, but the impact of the team has made a true difference in his experience.

Sweany is a pitcher for the Pacific Tigers. In his first year, he pitched a season-high six innings against No. 12 Indiana with three strikeouts. Sweany defines this moment as the highlight of his collegiate career thus far. “ I began [my freshman year] as a starter and started the second game of the series at Indiana, who was ranked #12 at the time. This was the best start of my career, I threw 6 innings allowing only 1 run.” In the brief season UOP had this spring, Sweany held a 1.23 WHIP in his four appearances and three starts, totalling to 21.2 innings. When Sweany is not on the field, he is developing stronger relationships with his teammates. Specifically, Sweany leads his baseball team’s Bible study group. Though the team is now dispersed and no longer on campus together, Sweany carries on the meetings through Zoom every Sunday. The relationships built with his teammates in Bible study as well as in the locker room has become Sweany’s favorite aspect of college, apart from playing the sport he loves.

Deservingly, Sweany was a highly-decorated 4-year varsity starter during his time at VCHS. Recognized as an All-League selection for 3 seasons back to back, to back, Sweany earned the League MVP accolade after his senior season. Additionally, he was chosen for the Maxpreps CA Small School All-State First Team. Back in 2017, Sweany and the VCHS baseball team made a section appearance where they walked away with the title.

“The best memory from my high school career was our playoff run my senior year. It started out with me throwing back to back no hitters to get us to the section Championship and ultimately winning. It was just so awesome finally being able to beat Bradshaw three times and win a Championship.” 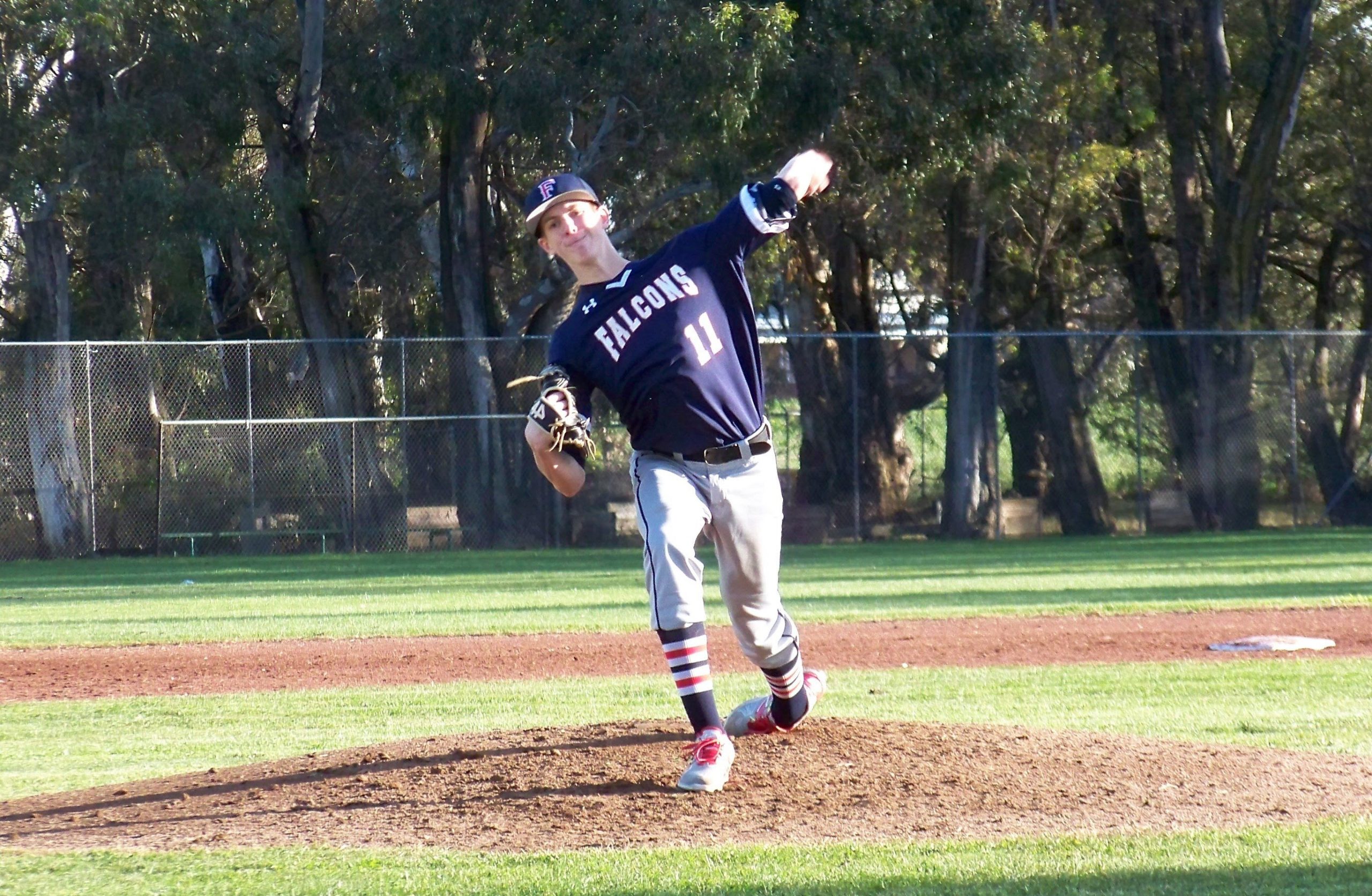 The same year, Sweany held a 0.65 ERA with 159 strikeouts – the second most in the nation at the time. With the many well-earned awards and recognitions based on his high school performance, Sweany’s character and leadership were just as evident. He cared just as much about his teammates as he did the game. “I was so glad to be able to win [the section championship] with that group of guys too because I felt that we were such a tight knit squad.”

Sweany hopes to play professionally after his time at Pacific. If not that route, he hopes to work in the analytics department of some professional sports team whether it be baseball, basketball, or football. If he could share any advice to student-athletes wishing to play at the collegiate level, Sweany preaches that hard work pays off – in every aspect. “It is so important to take every rep seriously and give 100% in everything you do because when your career is over you’ll look back at it and will have so much regret if you didn’t give 100%. This also pertains to the classroom, get the best grades you can get! Good grades will make it easier for you to get recruited because coaches will trust that you can get stuff done on your own.”